What are Killer Bees? 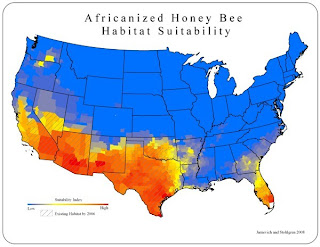 Killer Bee is a term that has been given to African honey bees that are now living in North America.


You are probably wondering how African honey bees ended up in North America.


(picture from Discovery Channel blog at Where will the killer bee go?)


Here's how it all happened:

African honey bees are well known for being fantastic honey producers. The only problem is that they are also very enthusastic about protecting their honey--they're aggressive and don't hesitate to sting.


The scientist was trying to breed African honey bees with South American bees to try to take advantage of the honey producing genetics of the African bees, but create calmer and more placid bees by crossing them with the gentle South American bees.


But the scientist took a day off and a person who was taking care of the bee yard saw these little entrances on the front of the scientist's hives. These entrances were specially designed to prevent the African queen bees from leaving the hive to breed in the wild. But the person didn't know and removed the special entrances.


The African queens did leave the hive and breed with wild bees in South America.


Very quickly this bee species spread through South America and because the land is connected between South and North America, the bee was able to keep moving north. Next the bees were in Mexico and from there they travelled to North America into the southern parts of the USA.


So far this bee has not been seen in the northern and more colder parts of North America.


There probably aren't any more pure African bees because they've bred with our bees. The term now used to describe these hybrid bees (bees who have bred with domestic and wild North American bees) is "Africanized Bees". They look very much like regular honey bees, except that they are smaller.


We don't have Africanized bees in Canada because it's too cold.


One thing hasn't changed. They're good honey producers and they still REALLY like to protect their honey.
Posted by Bee Magic Chronicles for Kids at 10:29 AM

Labels: about africanized bees, where did Killer Bees come from

This is really a great read for me. Thank you for publishing articles having a great insight stimulates me to check more often for new write ups. Keep posting!