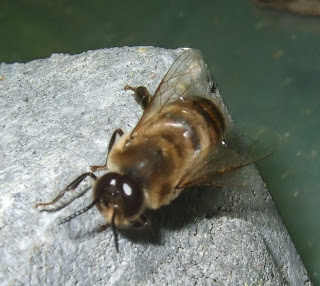 He's got the biggest wings, the biggest
eyes and the most fur. He's also the noisiest bee in the hive.

He needs to have larger wings to go with his bigger body so he can fly and that's why he's the noisiest. Listen carefully to the video below and watch for the bee with the long back legs--that's the drone flying in front of the hive.

He has the biggest eyes because vision is very important. He needs to be able to see the queen. 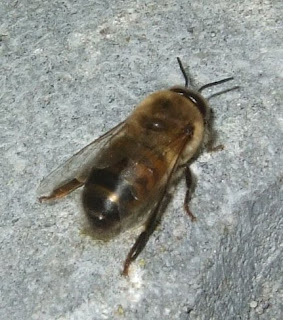 Take a look at the bee photo across the top of this blog page. There's lots of workers there who are smaller, there's even a queen with a yellow dot on her back.

Look carefully at the largest bees. Can you see the drone? Look for the biggest bee with the big goggle eyes.

Drones don't do any chores for the hive. They even need the workers to feed them. The workers don't mind feeding their brothers because it's part of their hive life.

The drones do have one very important task that they need to do and that's to mate with a queen. It's sad but true that after a drone mates with a queen he will die.

Every afternoon the drones leave the hive and go to a boys' hang-out called a drone congregation area. They wait there for queens to come so they can mate with them. That's where their big eyes help so they can see her.

Because drones don't do tasks such as guarding the hive, they have no need for a stinger. That's right. Drones don't have stingers.

They're big and loud and scary sounding but they're the gentlest bee in the hive. You won't see this bee in the flower garden since he doesn't collect pollen or feed himself.

Listen to the video. Can you tell the sound of the drone from the other bees?

Posted by Bee Magic Chronicles for Kids at 7:00 AM

When you took this video?Are there drone in hives this season?Hopefully we hear with succesuful wörks,Have a good wörks,best wishes.

Hello. This video was taken last year in the summer of 2009. It is winter now and very cold so I don't think there are drones in the hives now.

Barbara; the new blog looks great-- I'm glad to see it's coming along.