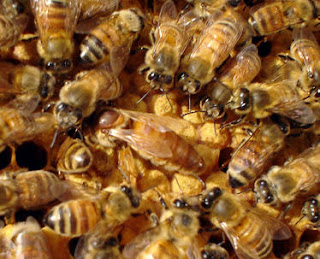 Her Royal Highness, the Queen.
She's actually not the boss of the hive and she doesn't tell everyone what to do... at least not in words (as far as we know).
The male drone is the biggest bee in the hive but the queen has the longest abdomen. It's often a golden colour and she'll have a brown or black back.
To keep the hive healthy and working well the queen gives off her own personal perfume called pheromones. Her children smell this pheromone and it makes them happy and helps keep them organized and working.

The queen's young daughters do all the work of taking care of the baby larva bees when they're just hatched. They also do a job called being an attendant to the queen. Another term for it would be a lady-in-waiting.

The queen is very similar to a human queen. She has a court of attendants and their job is to take care of her. They keep the queen always looking nice and well groomed.

They lick their mother's body, her face and her fur to keep her clean. They even have a little hairs on their legs that act like brushes that they groom her with.

They feed their mother too. The queen will never stop to feed herself because she's so busy laying eggs. Her daughters bring the food to her. 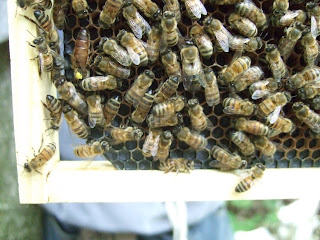 The queen is incredibly busy and hard working. She can lay between 1,500 to 2,000 eggs a day.
Can you see the queen in the photo? Her back is marked with yellow paint. Look for her golden abdomen.
The queen is so busy that she doesn't even leave her hive to go to the bathroom. Yes, it's true.
That's another job for her attendants. They have to collect and carry her poop out of the hive. (The hive must always be really clean so the bees won't just let the poop stay in the hive).

They feed their mother and she eats a lot. She eats about three times her own body weight every day. Do you know why? It's because she needs to be active and healthy so she can lay lots and lots of eggs. The queen eats only one kind food her whole life long and it's called royal jelly. This white pudding-like food is made by a special gland inside the worker bees' head. 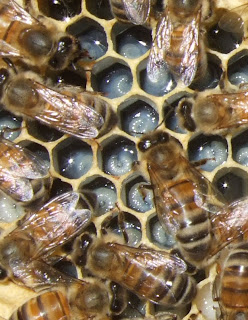 All baby larva bees are fed royal jelly too but they only get it for a few days after they hatch from their tiny eggs. See the picture of the larva in the cells. Can you see the white pudding-like substance that the larva is laying in? It's a pool of food, royal jelly and the bees are feeding it to them.

Later on we'll find out how a queen is made.
Next time your mother tells you that you have to take a bath you can ask her if she knows who gives the queen a bath.
Posted by Bee Magic Chronicles for Kids at 7:12 PM

I did not know that Queen bees are this busy.