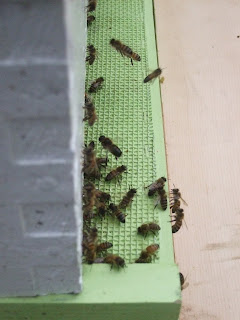 Do you have rules in your house? I'm willing to bet that you do.

You probably have a rule that says you have to eat all your vegetables and that you have to wash your hands before eating. Those are pretty good rules.

Bees have rules too. One of their very important rules is that their hive, which is their home, must be kept very clean.

The workers in the hive all have to do chores and several of the chores involve cleaning house.

Some workers will be given the job of an undertaker. Their job is to carry the dead bees out of the hive. The worker will drag the heavy dead bee down through the hive and out the front door. They she'll struggle to get it to the edge of the entrance and there she'll drop the body onto the ground. 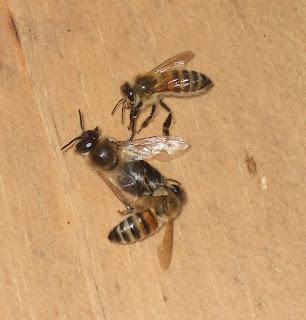 In this photo and the video below, two female workers are working very hard to drag a dead drone bee away.

Another job is to wash the floors. Bees will use their tongues like brooms to lick everything clean. Often beekeepers will observe bees outside on the front porch of their hive, licking the floor to clean it. They call that 'washboarding'.

How often do you have to take a bath? Bees like to be clean and they keep their bodies clean similar to how a cat does. They lick the tiny hairs on their legs and then reach up with those legs to comb and cleanse their body fur.

Bees have fur just about everywhere, even in their eyes!


When it comes time to poop, they have a really big rule. No one is allowed to poop in the hive. It's a no-no. Bees take what's called a cleansing flight to poop. They fly outside the hive and once they are about 3 or 4 feet away they'll poop in mid-air. 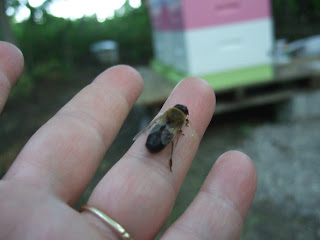 Their pooh is liquid and it's gold in colour. Can you guess what gives it the golden colour? Of course, it's the food they eat--honey. In the photo there's a large male drone bee on my hand - can you see the golden poop on my finger? Yes, he pooped on me (click to make the photo bigger so you can see).

In winter, pooping can be difficult and a bit of a problem. Bees don't hibernate through winter. Instead, they stay awake and shiver their wing muscles to stay warm. They share their body heat with each other in a cluster, just like penguins. 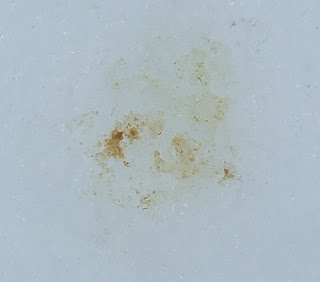 Isn't it funny that bees do the same thing as penguins even though they've never met?

In winter it can be pretty super cold outside and too cold to fly. In that case, the bees must hold their poop until a warmer day. Once a warmer winter day comes along, the bees will all fly out and defecate (which is another fancy word that just means poop) outside the hive.

In winter in Canada you can see the golden bee poop streak marks in the snow. That saying remains true, "Don't eat yellow snow."
Posted by Bee Magic Chronicles for Kids at 10:25 PM

i heard that bees defecation can be nutrient and healthy to use with tea like honey is that true?

is bees defection as nutritious as honey to use with tea? i heard that and i am having hard time believing that, i didn't even know that bees defecate.

im just curious about that picture which shows the Bee's Poop on your finger.

Are you sure its poop?
Then if it is, did you notice this "poop" coming out from the front of the bee[mouth] or from the back of the bee[near its tail]?

because, from the photo itself, it looks like as if the "poop" came out from the front.

do reply ASAP!
its important for my reseach!

Thank you and God Bless! =D

The poop definitely came from the back--rear end of the bee. I watched him poop but didn't have the camera going at the time. Then he was walking around on my finger after and that's why he looks that way in the photo.

All insects and animals that eat must poop (defecate) to get rid of their waste material. I have not heard of putting excrement in tea and I would not recommend it. It is probably not very healthy considering it is a waste product.

It would be much easier to collect honey from bees and put that in tea--and honey is full of good nutrition and very healthy for the body.

Dear Barbara..
I am Dwin from Indonesia and I am a beekeeper as well. Glad to find your blog thus we may share each other. Anyway..I am still believe that bee is the only one of animal which has no puff. I did some experiment to the bees and wondering that that liquid is not puff due to bee has 2 secretion only from body. one is for honey and the other is stung.
It seems that I also need to study more on this as it very valuable for human. Last night I closed to the apis dorsata and when I gave them the pure honey from apis mellifera, the apis dorsata spreads some clear and yellow liquid which I believe it was not puff.

Hi MacKenzie - the poop is kind of brown/yellow colour - like peanut butter.

Wow I never knew that

Hi, Barbara. Great blog! I'm planning to send it's link to my niece so she can learn about bees & how important they are to the ecology.

I'd love to hear your thoughts (in a way that kids can understand) about ways we can help bees.

As a vegan, I've decided to stop using honey altogether. I've seen a couple videos with automated machinery scraping the honey off of the combs. It looks as if that could cause serious injuries or worse to the bees.

Thank you for your time!

Hi Yvonne. I think one of the best things kids and parents can do is plant flowers for bees. Children can certainly use their influence to not use pesticides and sprays.

Regarding scraping the combs off frames, that is supposed to be done after the bees have either been swept off by hand with a soft brush or blown off with a machine similar to a leaf blower. There is one horrific video I've seen where this was not done and the bees were on the frames. This is not an accepted beekeeping practice.

How do bees poop if they have a Stinger in the way?

Lemzia - that's an excellent question. The bee has one hole at the bum. Her intestines for pooping are there, like a tube. Another tube above the intestines is the stinger.
Here's a website with a drawing of all the bee's organs
https://www.google.ca/search?q=anatomical+diagram+of+honey+bee&tbm=isch&imgil=y_XtK_tz56M7DM%253A%253BwBadpNK_xfRL-M%253Bhttp%25253A%25252F%25252Fwww.dummies.com%25252Fhome-garden%25252Fhobby-farming%25252Fbeekeeping%25252Fhow-to-identify-the-basic-body-parts-of-honey-bees%25252F&source=iu&pf=m&fir=y_XtK_tz56M7DM%253A%252CwBadpNK_xfRL-M%252C_&usg=__EjoUjMoC8EtNFiFQXdnYqrkiYfM%3D&biw=1366&bih=638&ved=0ahUKEwj0gM2BpfnTAhXE6CYKHWdiA-QQyjcIMA&ei=z34dWbTdBMTRmwHnxI2gDg#imgrc=Q3qPBYaLaR0i6M:

Thank you for posting the link to those pics. That is REALLY FASCINATING!!!
I always thought that Bees didn't poop and that is why they lived short lifespans, because the used 100% of the energy from the food the ate. But now that I know they can poop, it explains a LOT. It still makes me curious then, why Bees only live between 122-156 days. (approx)
Thanks again for being a Great source of INFO!!!

Dear Ms. Lindberg,
I am a teacher at the International School of Stuttgart, Germany and my students have enjoyed your blog. Would it be possible that they can ask you questions either through your blog or perhaps even through Skpe?
Best wishes,
Carrie Scafe

Dear Mrs Scafe: Your students are most welcome to ask questions either through the blog or you can email them to me at barb@beemagic.com. I could also arrange a time to chat via Skype if you would like. I'm glad your students are enjoying the blog.