This is the day. This is the one year anniversary day of when I started writing the Chronicles.

I already knew the topic was going to be about honey bees. In fact, I was pretty excited about it. I was absolutely in love with bees. They were infinitely fascinating with a unique and interesting biology. As well, they were social creatures, reliant on each other and their queen to survive. Then there's the by product of their existance--five products actually--honey, wax, propolis, royal jelly and pollen.

I was stuck though because I didn't know where to start. I remember when the story line hit me. In fact, within about 20 minutes I had the entire book in mind and what would happen. It was like a thunderstorm of creativity--an exciting time. But still, where would I start?

I had not written in years and was out of practise. I was sitting in the living room thinking about various scenes when one in particular came to mind. It was intense, a little bit scary, and exciting. I rolled over to the lap top thinking, just start! Don't think about anything, just start. And I did.

For the next 10 months or so the book just flew out of my fingers. I kept the keyboard busy every spare moment. When I wasn't typing, I was handwriting in notebooks. When I wasn't doing that I was either daydreaming or drawing. I was quite happily completely obsessed. I still am :)

Where It All Began 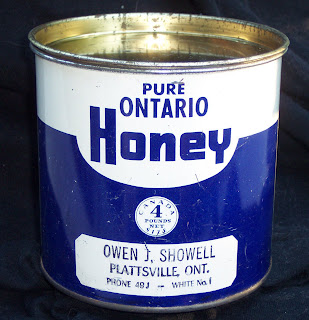 There was always honey at Grandma and Grandpa's houseNot just one kind of honey either. They had creamed honey, pasteurized honey and honey in the comb.
It was at Grandma's house that I tried honey in the comb for the first time. It was delicious and sweet. My Dad told me they ate the bees wax as a chewing gum when he was a kid.
I'll never forget the metal pails that the honey came in. They had metal lids and wire handles. We couldn't get these pails in the city. In the city, all our honey came in plastic containers. I guess it was old fashioned to have honey in pails, but later I found out there was a good reason for the pails.
Grandpa liked to spread his toast with a lot of butter and then he'd add a huge heap of honey. At one time I remember Grandma eating a lot of peanut butter and honey sandwiches. She got inspired and then mixed up the honey and peanut butter together in a container. She thought that was a marvelous idea.
One day Grandma asked me if I'd like to visit the bee man. I looked at her funny, "the what?" She explained that they needed to get some honey and she was going to go see the bee man. She said that wasn't really his name, that's just what she called him. Of course I wanted to see this man too.
We drove down country roads and after a while she pulled into the place where the bee man lived. We went inside a room that looked a lot like Grandpa's milk house - it had white walls and a big window. There were a few bees flying around inside and a couple of them were flying at the window, but the bees weren't interested in us at all. 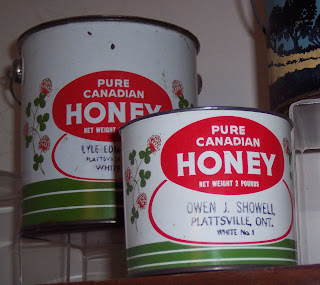 It was kind of exciting to be inside with bees and I wasn't scared of them either. The bee man was old like grandma and had white hair. He was very nice and he smiled.
He asked me if I'd like to taste the honey. Of course I wanted to, so I nodded, "Yes." He gave me a plastic spoon and he directed me to a big tank.
The tank reminded me of the water tank in my basement at home, the one where the hot water is kept for our showers and baths. At the bottom of the tank was a little tap and Grandma first held her spoon under the tap and I watched as the bee man turned the spigot on the tap and honey ran out onto Grandma's spoon.
It was my turn next and I put my spoon under the spout and the bee man turned the tap. I held my spoon as carefully as I could so I wouldn't spill. The golden honey was thick and it filled my spoon. I tasted it and it was very very good. 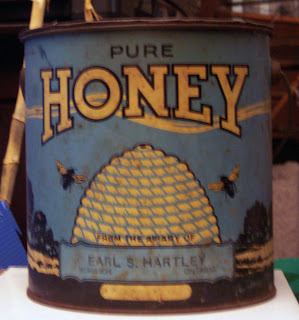 After that, Grandma brought her empty honey pails and the bee man held them under the spout and turned the tap to fill them. Then I understood that the metal pails were used over and over to refill with honey when she visited the bee man. I thought that was very clever.
The fascination with beekeeping and honey and the bee man has stayed with me my whole life. I regret that I do not remember the name of the bee man but he has absolutely influenced my life.
In the spring I will be starting with my first two beehives and I'm very excited to become a beekeeper. Maybe one day I'll be called the bee lady.
My grandmother passed away many years ago but she left me her honey pails. I have them on display in my living room and when I look at them I remember Grandma and her love, the friendly bee man with his delicious honey and the honey bees that flew around inside a room and I didn't need to be afraid.
Posted by Bee Magic Chronicles for Kids at 12:01 PM 2 comments: