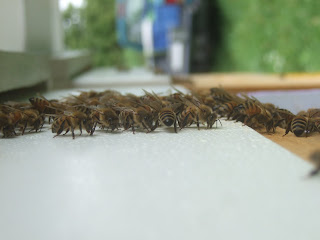 Do you ever have to help out at home? Would your parents ask you to help them clean?

There are bees inside that are assigned the job to clean.

These photos and video show bees cleaning outside the hive.

They use their tongues like brooms and they sweep back and forth. 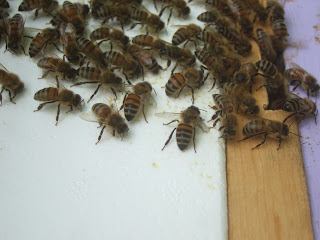 If you watch the video you'll see it's almost like a dance as they move their heads back and forth in a steady rhythm.

There's a saying: Many hands make light work. It's true that when more people help out the job gets done much faster.

I guess the bees' saying would be that many tongues make light work.

They understand the power of working together to get big jobs done.

That's probably why your parents ask if you can help out to. It makes everyone's job easier. 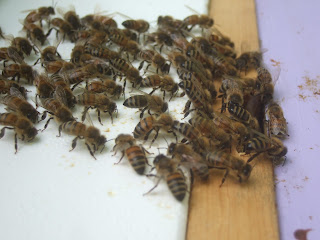 It's more fun to work when others are with you too.

See the bees sweeping with their tongues in the video below.


Posted by Bee Magic Chronicles for Kids at 7:42 AM 3 comments: 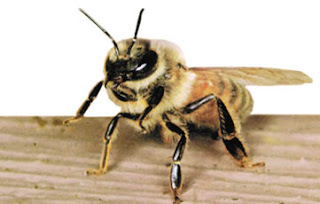 Have you seen the Karate Kid movie? Karate has some really cool moves and so does this bee.

She's a guard bee and she's striking her karate pose.

What do you think she's saying? "Don't mess with me I'm protecting my hive." That's what she's saying.

Compare the first photo to the second one of a standing bee pictured below. 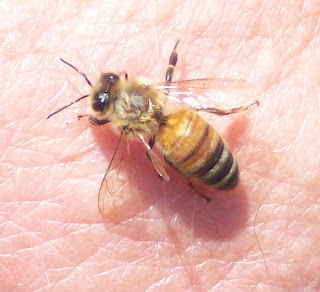 See the difference? The second bee is relaxed and just hanging around. She's not a guard bee.

Guard bees have the job of protecting the the hive. They're like security guards.

They have to check the ID of every bee that wants to come in the hive. They check ID by scent.

Bees from the same hive all have the same smell. If you smell right then you can come in.

When field bees fly back to the hive they'll go close to the guard bee. She'll turn her head, her antennae can sniff them.

But if there's a problem and the hive has strangers coming by, maybe bees from other hives, a hornet or a wasp, the guards will stand back on their legs in an attack mode.

If there's an emergency or danger from a bear, skunk, raccoon or some other creature the guard bees will release a chemical scent that tells the hive to attack. That's when more bees will come out and sting the intruder.

The bees know that they make precious golden honey that many creatures want to eat.

They guard their gold very well.
Posted by Bee Magic Chronicles for Kids at 5:02 AM 1 comment: