Throw Me Some Honey Please! 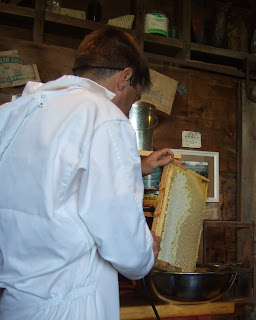 In Italy a very very very long time ago, before any of us were born. People in Europe and North America didn't have white sugar to make things sweet.
Instead they had something better--honey. The people loved honey and the bees that made it. They understood how very special the little insect was. Most homes kept bee hives so they'd have honey at hand. People that didn't keep bees would buy it.
Back then, honey was eaten in the comb. The beekeeper would cut chunks of honeycomb out of the hive. People would then take their spoons and dig into it and eat it--both the honeycomb and the honey. They'd spread it on their toast and drop a chunk into their porridge.
They would also crush the honey combs and leave them sitting for hours so that the honey would all drip out so they'd have liquid honey to put in jars. 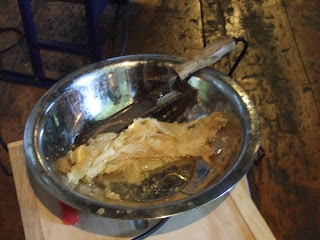 Back then, they didn't know a special trick could be used to remove the honey from the combs without destroying them. Back then the only way to get the liquid honey was to crush the combs.
It took a child to show the adults what to do.
Imagine yourself as a child in 1869 (well over a hundred years ago). Your father is a Major in the Italian army and he gives you a basket with a string on the handle. Inside the basket is some honeycomb with the caps cut off. He's asked you to carry the basket.
Would you hold the basket carefully so it didn't rock or move? What might you be tempted to do if you felt like playing? Do you think you might be temped to swing the basket around by the string?
That's exactly what Major Hruschka's son did. He swung that basket around by the string and something happened--something important--the honey was thrown out of the honeycombs by the centrifugal force of the swinging. The next great thing that happened was that Major Hruschka didn't get mad about the messy honey that leaked inside the basket. 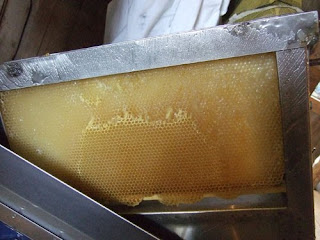 Instead he saw that it was possible to throw honey out of combs without crushing them and that was something no one had realized before.
That moment when you learn something new that's really important is often called an Eureka moment. It was a special moment.
Major Hruschka then set to work to make a machine that would throw the honey from the combs by spinning them just like the basket on the string. That's where the first machine, called a honey extractor, came from.
We still use the extracting machines to this day. Some have hand cranks that turn the frames in a circle and others are electric.
The beekeeper takes a hot knife to cut just the caps off the honeycombs. Then the frames of comb are placed in the extractor and spun around. The honey drips out and runs to the bottom of the extractor. There's a tap there so the honey can be poured out into jars. 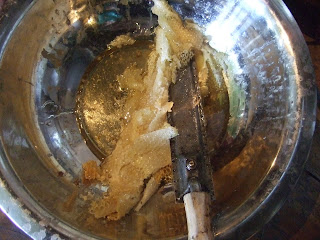 Once the combs are empty they are given back to the bees to refill. That meant a lot less work for the bees because they wouldn't have to make the honeycomb all over again.
I bet Major Hruschka let his son have all the honey he wanted to eat. And then guess what? After his invention Major Hruschka decided he'd like to become a beekeeper. And he did.
Posted by Bee Magic Chronicles for Kids at 12:17 PM 1 comment: