Imitation is the Best Form of Flattery 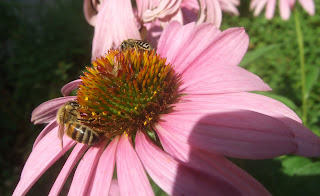 Who do you admire the most in the whole world?

Is it a movie star or a famous singer? A teacher? Your older brother or sister? Or your hero?

Have you ever been tempted to act or dress like them?

If so then your thinking isn't very different than a whole lot of insects.

You see many insects admire bees and wasps. It's 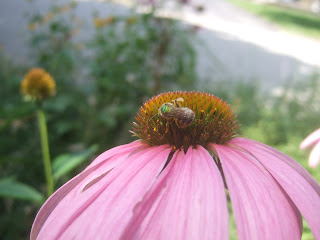 because they have stripes which are very fashionable in the insect world... and they have stingers.

Stripes are a warning to others: I have a stinger so don't mess with me!

Have you ever worn striped clothes? If so, you are copying bees and letting everyone around you know that they should be careful.

Copying is popular in the insect world. It's called insect mimicry. 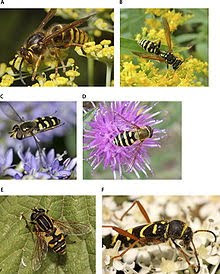 Insects use mimicry as a disguise to hide like pretending to be a leaf or a tree branch or to scare other insects away with painted big eyes or by releasing a terrible smell.

There are lots of flying and crawling insects that don't have stingers or venom but they want to have stripes so they look like a bee or a wasp. Can you guess why they'd want to look like that?

So that other insects will be afraid of them and think they have a stinger.

[This picture from the Wikipedia web site shows several stingless insects pretending to be wasps].

Next time you're in the garden and you see a striped insect, take a closer look. 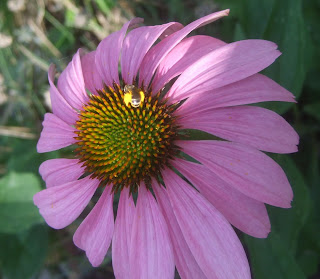 Posted by Bee Magic Chronicles for Kids at 12:26 AM