Predators in the Garden 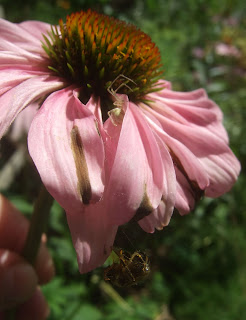 Have you heard the saying, "Busy as a Bee"?
Honey bees are well known for keeping themselves busy gathering nectar and pollen and caring for their young.
They forage in the garden with a focus on gathering as much food as they can for their family back in the hive.
It's a busy and difficult life for a bee. And sometimes it's downright dangerous.
To you and me a bee is an insect but to many others they're a nice juicy protein snack. That's right, they're a good meal for a hungry predator.

There are many predators in the garden that feed on insects like bees. Most of them are also insects. That doesn't seem fair does it? 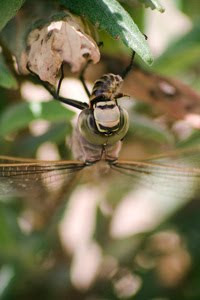 Can you think of an insect predator? Yes, a spider.

Spiders are very good hunters that help to control insects in the garden. Their sticky webs can often catch a bee.

Or they'll hide lie in wait for a bee. This white crab spider hid under the petals of the purple cone flower. The bee can smell the nectar and pollen offered by the flower and so she lands on the flower. Before she knows what's happening the spider leaps out and grabs her and gives her a poisonous bite.

Sadly it's all over for the bee. She's become a spider's meal.
In the photo above can you see the white spider hiding on the purple flower?
Another larger predator of bees is the large dragonfly (pictured at left). They can catch a bee in mid air. Hornets too are much larger and stronger than bees and will catch them and eat them. 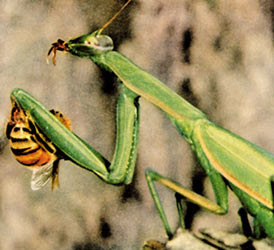 Then with their strong mandibles (mouthparts) they'll bite the bee's head off, killing it.
Other garden predators are the preying mantis. This stick-like insect (pictured at left) can sit very still, looking like an innocent leaf. Then it'll spring forward when a bee lands close by and catch it with it's claw-like arms.

Birds will catch bees in flight and eat them too. Frogs and toads have long tongues that can lash out and catch them.

Mammals like raccoons, skunks and bears love to eat bees and bee larvae too. 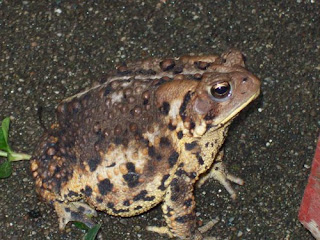 Everywhere the bee goes she's in danger of becoming a meal.

And finally, other predators will feed off the dead bee corpses, insects like ants or rodents like mice.

The death of a bee is sad but the good thing is that in nature nothing ever goes to waste and her body will nourish other creatures who are in need of a meal.
Posted by Bee Magic Chronicles for Kids at 12:29 AM