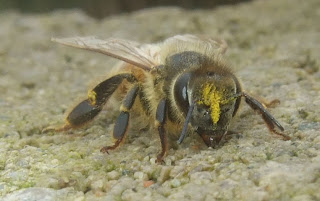 Have you seen the commercial on TV advertising the Swiffer sweeper?

The swiffer has a cloth that glides across the floor and the bits of dust and debris can't help themselves. They attach themselves to the Swiffer like a magnet.

But what does this have to do with bees? Bees and the Swiffer have a lot in common. If you've ever been to a birthday party and played with balloons then you're like bees and a Swiffer too.

Have you ever rubbed a balloon on your hair and then stuck it to your body? When you rub it you create static electricity.

When the Swiffer rubs across the floor or an object, it creates static electricity too. 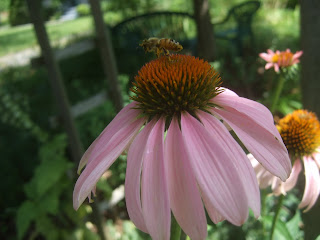 Static electricity is like a magnet to little particles like dust..... or something similar to dust.... Pollen.

When a bee flies through the air static electricity builds up in her fur. Then she lands on a pollen covered flower.

The tiny particles of pollen can't help themselves, like magnets they are drawn to the bee and attach themselves to the bee's fur.

This makes it easier for the bee. She'll sweep her legs over her body to collect the pollen. 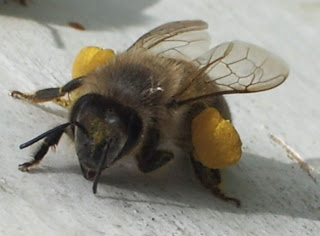 Then she'll take some of her spit to moisten it to make a lump.

She'll stick the lump to stiff hairs (called pollen baskets) on her back legs.

After that she'll fly home with her load.

So next time you see a Swiffer sweeper, pretend like a bee and give it a try.

Posted by Bee Magic Chronicles for Kids at 1:23 AM