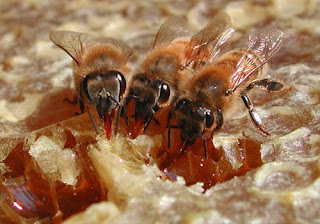 The bees put their tongues into the flowers and suck up the nectar.

And we know that the bees fly back to the hive with that precious nectar.

But what happens after that? They make honey!

Let's go inside the hive and find out how the bees do it. 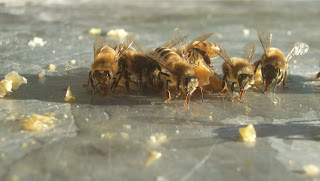 When a bee first arrives back at the hive, she's flying heavy. Her stomach is full of nectar. She'll often be greeted by a house worker bee at the entrance.

The house bee will climb the frames of comb to the honey area. Once there she'll regurgitate droplets of the nectar to the tip of her tongue. She'll hold them there. 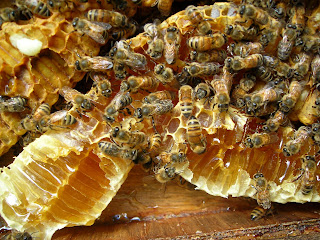 Why does she do that?

She's letting the warm air inside the hive dry up the liquid in the nectar. She'll hold droplets a few times and then she'll dunk down inside the cell and regurgitate all the nectar.

After that she'll go back down the hive to wait for another field bee to come in with another load of nectar.

Next will come more house bees. These will be fanning bees. Their job is to beat their wings to create wind that will blow on the nectar and dry it up. As the liquid evaporates the bee magic begins.

The nectar becomes thicker and thicker. It becomes sweeter and sweeter. The bee might even taste it just to be sure. Mmmmm. It's good. She knows exactly when the honey is thick enough--ripe enough--to be done. 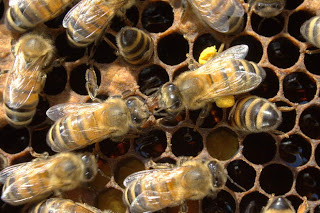 Then more house bees will come. They will be capping bees that can make wax. They'll put lids on the honeycombs to store the honey just like how we store food in jars.

[Picture at left - The yellow stuff in the cells is pollen. The shiny liquid is honey].

When the flowers have faded and winter comes bringing cold winds and snow, the bees will snuggle together in their hive to keep warm.
And while they warm themselves all through the cold months of winter they'll have lots of food--honey.
Honey made from a flower's nectar.
Posted by Bee Magic Chronicles for Kids at 8:00 AM

Very nice blog...forwarding it to my grandchildren.

Would you ever talk to a class about what you know about bees via Skype? Our 2nd grade class is learning about bees and you seem to know a lot of information. Do you happen to know the basic needs of a bee and 4 things they do to survive?

Hello Anonymous. Yes I could talk to a class via Skype.
Bees need pollen as a protein to help their babies grow and they need nectar as a source of food/energy. They also need a home that is a cavity large enough to accommodate their honey combs.

They work especially hard all summer to gather honey so that they'll have it as a food source during the winter.