It's No Zoo - Queens in Cages 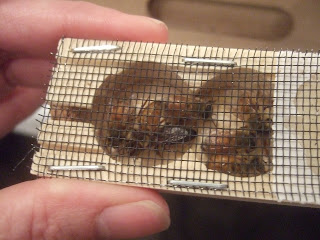 Yes, these queen bees are in cages but it's not at the zoo.

I bet you're wondering why someone would put queen bees in cages. There's a really good reason.

In early spring in Canada (April and May) the bees are slowly getting busy as the weather gets warm.

Many beekeepers have hives with so many bees that they want to divide the hive. Beekeepers call it splitting or making splits. When they take the bees from one hive and separate them into two there's a small problem. There's only one queen. 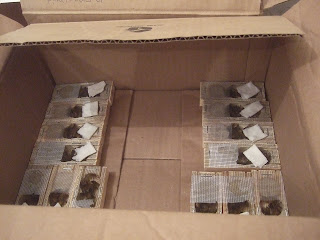 Bees can make a new queen (I'll tell you how they do that another time) but it takes over a month for a queen to grow up, hatch and mate.

During that time the hive can't do very much. So many beekeepers purchase queens from Australia. In Australia the weather has been warmer and their queens are already grown up.

Australian beekeepers put a queen in each cage to send to Canada.

The queen can't travel alone, she's too important. The Australian beekeeper puts some ladies in waiting into the cage as well. 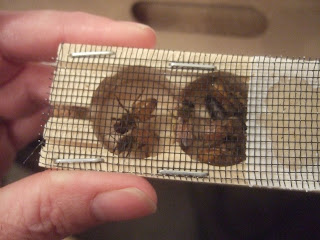 The ladies will feed the queen, give her a drink of water, and will groom her fur. She can't arrive in Canada looking anything less than beautiful and nicely groomed.

The cage has a small hole in one end. The beekeeper puts them into the cage and then plugs the hole with a cork plug. There's a hole in the other end too and it's plugged up with candy.

The ladies in waiting will feed the candy to the queen while they wait to arrive at their new home.

The bees will fly... but on a plane! Hundreds of queen cages are carefully packed in cardboard boxes for their trip.

When they arrive they are tired and thirsty. At the airport the beekeeper puts droplets of warm water on a small square of cloth so the bees can sip it and quench their thirst.

At the bee yard the queen can't just be put into the new hive in Canada. The bees don't know her or her special scent. If she was just placed in the hive, they might think she's an intruder and sting her.

The cage is put into the new hive and the queen is safe in her cage. The bees will chew and chew on the candy to open the hole and let the queen out. By the time they finish eating the candy they will know the new queen and her special smell (call pheromones) and they will happily accept her in their hive as their queen.

Do you think Australian queens buzz with an accent? Listen to the video of the bees in their cages (below).

(Thanks to John at Oxford Honey & Supplies in Burgessville, Ontario for allowing me to photograph the queens).

Posted by Bee Magic Chronicles for Kids at 10:55 PM