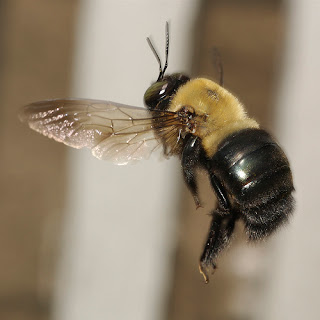 They do have teeth. They really do.
But these teeth aren't for chewing.
We covered mouth parts of the bee previously where we looked at bee mandibles that open and close like a gate and their long soft pointy tongue called a probocsis.
But there are no teeth in a bee's mouth.
So, where are the teeth? On their wings of course!
Are you wondering why a bee would have teeth on their wings? To make it easier to fly of course.
[Note: All these photos are of bumble bees and not honey bees. It's just the photos were really nice wing shots so I wanted to use them].
Here's Why: Bees have four wings. They have a larger wing and a smaller wing on each side.
Most of the time if we see a bee just standing there we see two wings. What we're seeing is the large wings closed up and sitting on top of the smaller wings.
Why do they have four wings? 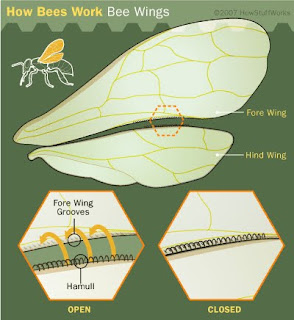 To make flying easier.
When a bee wants to fly she locks the larger and smaller wings together with tiny zipper-like teeth that are located on the edge of the wing.
Once the wings are locked they form two nice large flying wings.
Here's some honey bee flying facts:
* A honeybee can fly 24 km in an hour at a speed of 15 mph.
* Its wings beat 200 times per second or 12,000 beats per minute.
* Most bees fly in a range of about 5 miles from their hive looking for pollen and nectar. 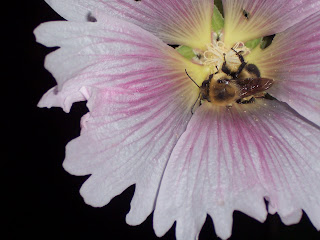 When inside the hive, or when working inside a flower, bees unlock the teeth so they can move their wings over their back.
They do that so their wings won't get damaged while they're working.
A honey bee will also tuck her wings on her back so she can dunk down inside a honeycomb cell.
Bees don't just use their wings for flying. They'll also use them as fans to send out their scents for the other bees to smell. Some of their scents can be "home smell" so a bee outside foraging will be able to sniff her way home. 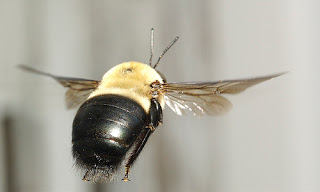 Another smell could be "Red Alert we're under attack". I bet you can guess what that message means. Yes, sting!
On hot summer days the bees will use their wings as fans to cool the hive by moving hot air out of the hive and bringing cool air in. This is called ventilating the hive.
Bees can do air conditioning to cool the hive on hot days too, but that's another story I'll tell you about another time.
Posted by Bee Magic Chronicles for Kids at 10:26 AM

Labels: bees fanning, bees have teeth on their wings, ventilating the bee hive


I didn't know that bees teeth were on their wings! then how do they chew through wood?

Honey bees don't chew wood although there are probably other bees that do, i.e, the Miner Bee. Wasps are well known for scraping wood with their mandibles. They add water to the wood scrapings to make a pulp which they use to form their bulb-like paper nests. These nests can be as big as a basketball.
History tells us the Chinese observed the wasps making paper and that's how they got the idea to make paper. Paper is made using the same process as the wasp.

Why did bees have teeth in Bee Movie
I don't understand
Why did that have human teeth in the movie it's illogical and scary I don't like it.

Thanks for your comments. In the Bee Movie it was a cartoon and they put clothes on the bees and had them walk upright. In real life bees walk down on all six feet and they certainly don't wear clothes! Nor do they have teeth like people. I don't like putting people teeth on a bee either. Thanks for visiting my blog.

I think it would be great for you to write a simple nonfiction book about insects and animals. My son is two and very into animal facts of any kind. When we check out animal fact books from the library they are a little to detailed and above his level. What brought us to your site was the question he asked do bees have teeth. Good luck in your quest to become an author.

Unkown, thanks for your comments. I should be back to writing again soon as I'll be retiring. Non fiction books of fun facts for young children sounds like a great idea. Thanks for the feedback.