Vampire Mite Says: I Want to Suck Your Hymolyph 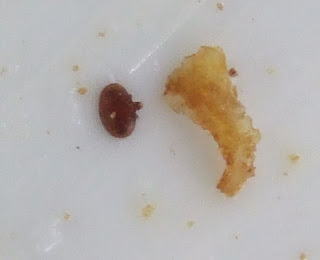 If you were a vampire and you wanted to drink a bees' blood, that's what you'd say.
There really are tiny vampires that want to suck the bees' blood. Maybe you have heard of them? They're little insects called Varroa Mites.
We say bees' blood, but in truth bees don't have red blood like we do.
Insect blood is called hymolpth and it's a white and yellow colour. If you've been in the car when a bug hits the windshield, that's their hymolpth splattered on the glass.
[Pictured above is a round brown Varroa Mite. It's like a bee flea. It's actual size is about the same as a pin head]. 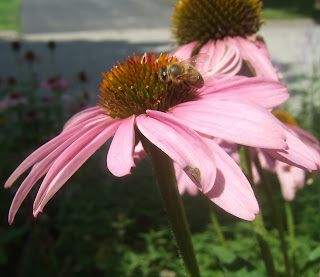 No matter the colour, bees' blood is just as important to the function of their healthy body as our blood is to us.
[This is a bee I photographed at my home. When I made the picture large (click to make it large) I can see a mite on the top of the bees abdomen. Can you see it too? It's riding on the bee.
The bee is busy working hard, trying to collect pollen and nectar to feed her family. Meanwhile, the mite rides along and sucks her blood.
The mites are shaped round and flat. They have little sucker feet that cling to the bees' fur. 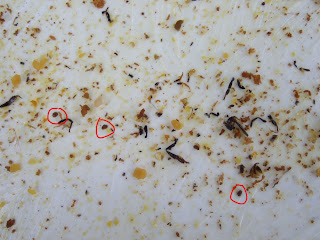 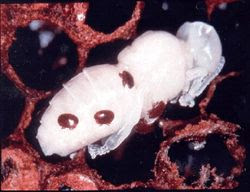 This magnified photo is of a bee larva that's been removed from its cell. Can you see several brown mites? There are 5 of them sucking the larva's blood.
The larva can't fight back because it has finished growing yet. It's not a fair fight is it?
When the bee hatches the mites will come out of the cell with the bee and ride on the bee, clinging to it's fur.
Mites were accidentally brought to the USA just over ten years ago. They have spread very quickly all over North America and also the world. They were able to spread quickly because they ride on bees that fly. (They don't need their own wings when they can hitch a ride on a bee).
The bees are also shipped by planes and trucks to help pollinate fruits and vegetables and the mites travelled with them. That help them spread across our country faster.
Beekeepers and bees are fighting together to find a way to stop the spread of Varroa mites from killing bee hives.
Posted by Bee Magic Chronicles for Kids at 8:00 AM

May I add also that bees can be troublesome, and some people can be fatally allergic to bee stings. But they're part of our nature and bees gather nectar and pollen from plants and in effect help pollinate crops.